In preparation for my contribution to the annual QFWF Meeting Day of the ― dedicated to the theme of Bird Wisdom ― I read the stories about the Alaskan Tlingit raven. The story evoked its own story with the raven, which I could not ignore.
Not only does the Raven figure as a shaman in the myths of different cultures, the raven also appears to visit people in late modern times in their dreams ….

I lived in Amsterdam in 1985. I was a cook and trained in Gestalt therapy. I had rented a cellar as a studio where I created my own images from a visual process.

The first image I made was a box that had been lying on the seabed for a long time, at least that’s how I imagined it. The box was weathered on the outside and the material showed its antiquity:
Inside, however, it was endlessly blue and spacious.

I created this box, in response to my question:

“What arises from my creativity?”

The first image that emerged from my quest was the raven.
It was made by a frame construction iron wire with black painted papier-mâché bird, mounted on a wood base:

“The raven stood on top of the cupboard in my studio and watched me do everything I did.
This raven was very critical and also somewhat cynical. In regards to everything I wanted to do ….”

When he got home, Robin decided to have a serious conversation with the raven:

“If you know so well why don’t you use your critical discernment to help me?”

In a half-dreaming state, the raven responded by sitting on the other shoulder:

“The raven that had previously perched on one shoulder now watched from the other shoulder, flying ahead of me now and then, scouting the road and noticing impending danger.”

Wisdom of the Raven 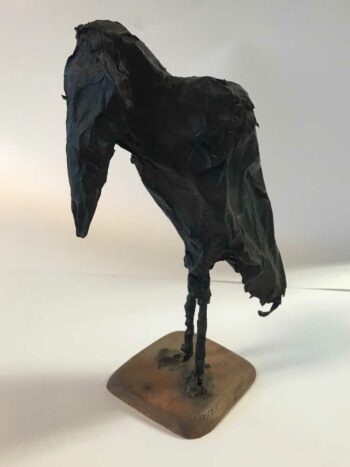 The appearance of these animals is furry, accustomed to living with the least. In their behavior Ravens appear to be social animals, who also move in groups and are in continuous dialogue with their environment.

A Tlingit myth tells that the raven is an animal that can turn into a boulder. This appearance of the raven shows him as an expert at being able to tolerate or ignore feeling.

The disadvantage of that art is that Raven can take care of others, but it is very difficult to take care of himself.

In European mythology, ravens are associated with gravediggers; animals that show dignity and add value in situations of loss and grieving.

The Roman god Janus ― after which the month of January is named, is often depicted standing at a gate, with two heads: one looks to the past, and the other to the future. Similarly, Robin’s Raven hopped from left to right shoulder, serving as both critic and counselor …..