By Fred de Haas – translation into English by Greg Suffanti

Nanzi’s stories are an inseparable part of the Caribbean heritage. Tens of thousands of Caribenos have listened breathlessly as children to the pranks the African Spider have played on people and animals, often larger than himself.

In 1952, the Curacao teacher Nilda Jerusun Pinto collected about thirty ‘Cuentanan di Nanzi’, which were published for the first time in 1965.

The then inspector of Education, Mr. P.T.M. Sprocket, every inch a gentleman, thanked Nilda Pinto in his forward for reconnecting children with the stories of their own culture:

“For years we did our best to keep everything that was truly Antillean out of our education. But there was always someone who sensed that our educational practices needed a change of direction.

One of those people was Miss Nilda Pinto.”

According to Tirso Sprockel in 1965!

In these turbulent times, characterized by all kinds of political pranks, I think it is a good time to look back on the life of master con artist Nanzi. 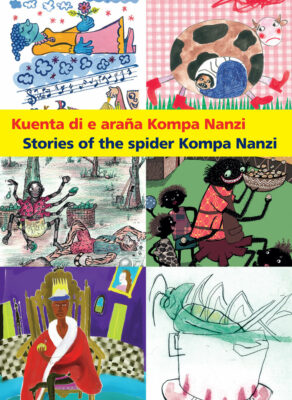 Who doesn’t know the name of that mean spider who crossed unscathed from West Africa to the other side of the Atlantic to settle permanently in the Southern United States and the Caribbean?

Of course, the forced emigrant Nanzi would have preferred to stay with his ancestors in Africa, but three hundred years ago he didn’t have much choice. In the ‘New World’ he established himself in the memory and storytelling of the countless many who made the crossing with him, squandered on the European merchants and plantation owners: people who are today part of a new Creole society.

Nanzi has popped up all over the Caribbean. Also appearing in the Antilles, where his escapades in the 20th century were recorded by the – who died young Curacao teacher Nilda Jesurun Pinto, in her ‘Cuentanan di Nanzi ‘ (1952), a publication of which I have before me from 1965. Nanzi and his family look at me slyly from the front cover, seated on the silly Tiger named Cha.

Nilda Pinto’s booklet formed the basis for the bilingual edition entitled ‘Kon Nanzi a nek Shon Arei / Hoe Nanzi de Koning’ (Amsterdam 2005). The Dutch text was provided by Wim Baart and Lieke van Duin,  and the Papiamento text was modernized and converted to the new Curacao spelling by Sidney Joubert and Hubert Lemmens.

In story no. 28 from the booklet from Nilda Pinto (‘Com aranja a nace na Corsouw’) and in the first story of the deluxe edition from 2005 (Kon arana a nase na Korsou’ / How the spider was born on Curacao’) the reader is certainly misled.

The story reveals that Nanzi magically turns his wife and children into spiders by accident. But the answer to the question of whether Nanzi himself also becomes a spider, strangely enough, remains somewhat in the middle, and is left to the draughtsmen and illustrators. In Nildo Pinto’s book Nanzi is a spider, but in the 2005 edition, the illustrators sometimes present Nanzi as a human being (Hans Leydekkers), then as a human and a spider (Doesjka Bramlage), as a kind of ‘alien’ with spider legs (Capricorne), as a stylized spider with the head of a boy and the teeth of a shark (Marenthe Otten) or as a fantasy figure with spider legs (Anton Vrede).

Every child has to laugh at Nanzi’s pranks, but ultimately, Nanzi is anything but a pleasant character. He is greedy, lazy, impulsive, duplicitous and even mean. He is a con man, a murderer and a hypocrite who does not hesitate to cheat and rob his wife and children when it suits him. He is the ideal figure to represent and personify all of the latent bad qualities that reside in every human being.

And when the stories are told or read well, they have a tremendous cathartic effect. However, they are less suitable for just being read as the stories are often bland and the reader becomes quickly bored. The stories really need the ‘sauce’ of recitation. But some stories are fun just to read, such as ‘Cha Nanzi and Temeku-Temebe’ (p. 57, 2005 edition, ‘How Nanzi Tricked the Devil’ (p. 70, idem), ‘A Bet from Nanzi’ (p. 75 idem).

The stories that Nilda Pinto have collected take place in Curacao.

Nanzi is constantly busy trying to organize money and food, first for himself and then for his family, who gleefully and complicitly gorge on the food that the father ― usually to the disgrace of others ― has managed to rustle up.

For that reason you will find many references in the stories to plants, fruits and dishes from the traditional Curacao kitchen: guava (juicy subtropical fruit), soursop (ditto), pumpkin, kadushi (cactus soup), shimaruku (West Indian cherries), empana (meat patty), warapa (tamarind with water and brown sugar), funchi (cornmeal, water and salt), tutu (cornmeal, beans & bacon), awakati (avocado), etc. Also, animals such as the Chuchubi (a type of Thrush), and the Warawara (a bird of prey), play a role.

Nanzi in the church

If the animals didn’t continuously play pranks on each other, you could imagine yourself in a Garden of Eden. The snake, the tiger, the cat, the billy goat, the tortoise, and the spider live more or less peacefully together. Everything is possible in that ‘paradise ‘.

As a good Catholic and with a CDA-like (Dutch Christian Discourse Analysis party) mentality, Nanzi visits God and the Devil with whom he acts on a ‘you and yours’ basis.

Nanzi also obediently attends Catholic early mass with his wife and children after having just played a mean trick on someone.

Nanzi knows which church he needs to go for absolution!